Is It Harder for a Same-Sex Couple to Divorce? 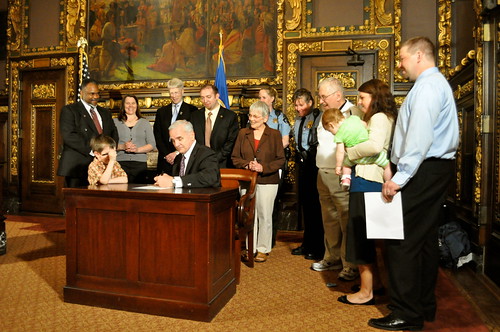 A recent article, “For gay couples, divorce comes with extra costs”
describes the difficulties some people have faced in getting a same-sex divorce. Some of the difficulties identified have been addressed in Minnesota’s recent same-sex civil marriage legislation and others are not unique to same-sex couples. Here are the problems identified in that article and my thoughts.

Problem: Time together: Reality vs. legality. Many same-sex couples lived together for years before being able to legally marry. During the years or decades before marriage, they acquired assets, bought homes together, shared expenses, acquired debt, and commingled their finances. Yet, under traditional divorce law, it is only assets and debts acquired during the marriage that are considered.

This is also a problem for straight couples who live together for years before marrying or who never marry. When their relationships end and they need to divide their assets and debts, divorce laws don’t help them. Unless they entered into a prenuptial agreement addressing how these assets and debts acquired before the marriage would be divided, or if never married – a contract addressing these issues, they would have a difficult time finding an efficient legal remedy for their situation. Litigating these issues in court will be expensive.

These issues can be addressed in the collaborative process, which is not limited to divorces, and where people with unique problems and issues not adequately addressed in traditional law forums can reach agreements. Once agreements have been reached, these agreements can be filed with the court and made into enforceable court orders.

Linda Ojala, J.D. has been practicing collaborative divorce since 1993 and believes that most people want to avoid court and make their own decisions about their future. As a Financial Early Neutral Evaluator for Hennepin County Family Court since 2007, she has helped couples make realistic assessments of possible outcomes in court. Learn more at www.TwinCitiesFamilyLawAttorney.com